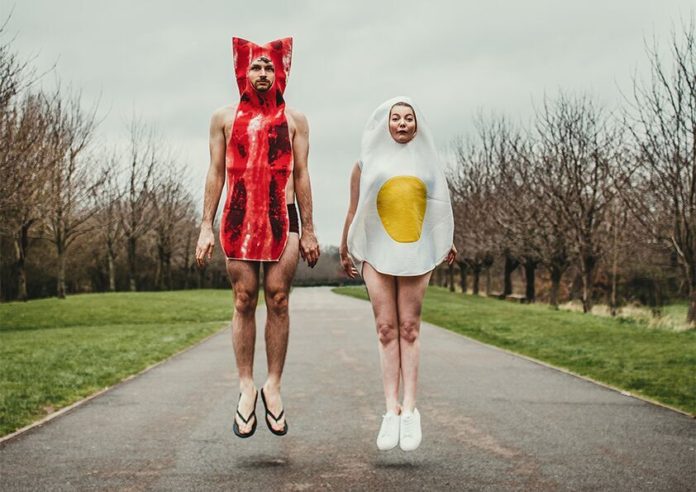 At this year’s Fringe you could not have missed Hot Mess’s surreal poster featuring the comedy duo of Max Levine and Anna Piper in breakfast attire.

But who were this ‘Full English’ of comedy? Anna is a stand-up and actress originally from Birmingham, and was ‘highly commended’ by Funny Woman as part of their annual competition. Max is a writer and performer with credits including The Cambridge Footlights, and hails from Nottingham.

The two met as members of The Soho Theatre Young Company and developed a selection of comedy sketches which became the full ‘Bezzie Mates‘ show at this year’s Fringe. The fast paced show was all about Max and Anna’s intense friendship. The two even filmed themselves for a year to make sure they didn’t miss any good sketch ideas, which they then interwove into their show, including an astonishing story about Max’s Spanish teacher outing him at his year 9 parents evening!

We wanted to find out how Fringe 2018 worked out for the comedy duo, and what 2019 holds in store for them.

We did a spot at ‘Spank!’ (a midnight cabaret at The Underbelly) that was totally bonkers. The audience were up for it, it was full of beautiful weirdos, and the whole thing ran over by an hour because everyone was having so much fun. Dream gig.

Anna : Max realising all he’d eaten in two days was a packet of McCoys and a KitKat.

We found that flyering worked when we could have a conversation with people, make a connection and sell the show. When we just tried to shift bits of paper it was less effective.

Our favourite audiences were weirdly always comprised of amateur sixth form theatre groups, specifically musicals. They just have so much optimism. We’re now pretty big in that scene.

Max: I loved ‘Roisin and Chiara’
Anna: I loved ‘The Delightful Sausage’.

We got told something super useful. Take a piece of paper and divide it into three. In the top third write what a perfect fringe would look like (huge profits, 5 star reviews, nominated for best show etc), then write the worst possible outcome (no one comes, you lose loads of money, no one wants to have sex with you). Then write something in the middle, a realistic set of goals. Finally, rip off the top third and bottom third and you have your Fringe Plan.

Also remember that people might not be having as nice a time as they make out on Twitter so try not to think too much about their 5 star reviews from ‘Edinburgh Sofa Retailer dot com’ – you’re doing good, just keep swimming.

We never really nailed this to be honest. The people that did come came because it looked like their bag. No one we emailed more than once came. Not sure if the ‘thousands of regular emails’ approach work. You probably need to get publications interested throughout the year rather than just at fringe time. I think that’s our takeaway.

We made lots of connections with producers and programmers. Now’s the job is following up on them all! Hopefully the impact will be some nicer gigs and some bigger opportunities to showcase our work on radio and TV. Fingers crossed.

B. A few questions to get to know you better

10. When you are not performing how do you like to unwind?

Max: Dystopian dramas. Margaret Atwood really puts things into perspective you know?
Anna: My seven cats. Some say seven is too many. To them I say, meow.
Max: Red Wine!
Anna: Cider and black.
Max: Molly Weasley, I admire her sense of ramshackle interior design and her strong marriage.
Anna: Hedwig. I’m most awake at night and I can rotate my neck 270 degrees.

Slamming doors. IF YOU NEED A WEE THAT’S FINE BUT LET’S CLOSE THAT DOOR GENTLY SHALL WE?!

That’s actually something they do at Spank! It’s called the naked promo. Someone gets naked and can promote anything they want for a minute. It’s kind of lovely when they do it because it’s for charity and everyone is on board. We’d be up for it but three rules: no cameras, good lighting and six months warning!

Mother India. Oh my that Indian tapas is the one!

16. What have you done since the Fringe and what is the next big thing in your calendar?

We’ve been developing a radio sit-com and working on next year’s show! After all, venue applications open in December.

We hope to be. We’re working on something a bit different for 2019 which we came up with earlier this year. Early days, but we’re looking forward to our next Eddy.

And we at The EdinburghFringe.Com very much hope to see them back next August – full fry up on us guys! 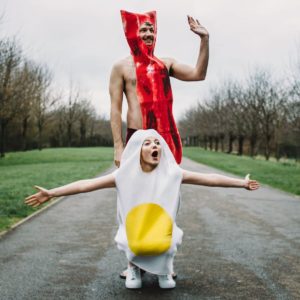