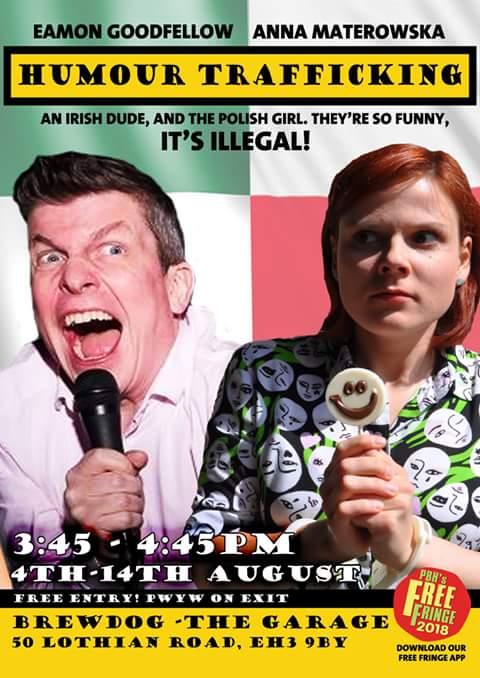 Today we catch up with Eamon Goodfellow.

Eamon and fellow comedian Anna Materowska brought their show ‘Humour Trafficking’ to the Free Fringe this year, with an 11 day run at Brewdog on Lothian Road. We hear from Eamon on the difficulties of marketing a free show, his future plans, and some sock advice for Fringe performers!

A full-house on the wettest Sunday of the Fringe after standing flyering in the rain in Grassmarket for 2 hours.

Black Wednesday – in the crowd was another act who handed an audience member a flyer for their show while I was performing, they even laughed at the flyer!!

Flyering and rousing people from the pub we performed in were the most effective way of generating audiences and we had a great picture on the flyer that helped with that. We didn’t use the Fringe App due to the cost. Facebook and Twitter had minimal impact. We only ran for 11 performances so a review was probably unlikely.

Our venue had a capacity of about 40 and we averaged 22 per performance which we were pretty happy with. There was a real spread of ages and nationalities including one really confused Finnish couple who I don’t think understood a word we said. Favourite moment was when I shared with the room that an audience member had had sex on film as part of an art project (her mate dropped her in it).

Extra socks on wet days, flyer shows prior to yours that are similar to yours, don’t get disheartened.

Didn’t really have one, wasn’t sure how to get reviewers / media involved, maybe next year!

Now started a regular Sunday night show in The Lamb and Flag, Covent Garden (London). The Fringe really helped in giving me the confidence to do this.

B. A few questions to get to know you better…

I’m like Harry Potter (when he has let himself go a bit, well Voldemort’s dead and Ginny’s lost interest in, you know, “hide the wand”).

Other performers talking at the back!

16. What have you done since the Fringe and what is the next big thing in your calendar?  Regular Sunday gig Mc-ing Laughs at the Lamb as well as regular paid gigs. I have just played the Stand Glasgow and will be hosting Stuart Goldsmith and his Comedians Comedian podcast at a comedy night in Welwyn.

What ever happened to…The Fear?