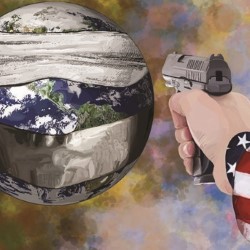 The flawed execution of this show unfortunately meant it received an overall 2.4, which gives it a final 2 star review. As an important caveat, we reviewed this show on Wednesday 31st July, a preview night. However, we did pay for a full price ticket on the night which we believe justifies this review, and unless the show undergoes significant changes, we believe the inherent problems we saw will continue throughout the Fringe run.

The show is billed as the ‘Comedic musings from an American artist who moved from Ohio to Brooklyn to Iceland. Discussing the current disturbing political state of the USA and how it has affected the ways in which people from around the world view Americans. Other topics include: living with Icelandic elf-people, dating as a bisexual, going to jail in America and traveling all over this wonderful planet. Examines how similar people can be across the globe despite major cultural differences. A perfect show for Americans who don’t take their country or government too seriously.’

Ohio native Joseph was not however first to appear on stage. In fact, we were treated to the Icelandic comedian Helgi Steinar, who gave us a tour de force of accents and languages in a UN skit. He was not billed to appear but I was quite happy he did and he was a great warm up act who I would be happy to see performing a full-length Fringe show.

As much as the warm-up act built the audience up, the flat tone of Joseph’s delivery soon brought the audience down. The musings rambled from being an alcoholic in America, to moving to Iceland. Why an alcoholic would move to the most expensive country in the world to buy a pint was never explained. Very little insight into Iceland from someone who claimed to have lived there for years other than the people are good-looking and they have an odd-shaped letter. And he once got locked out of his flat…

The ramblings continued through American gaols, drug use and travels. Nothing on ‘dating as a bisexual’ and very little on ‘icelandic elf people’ as promised in the blurb. The musings had no coherent theme and certainly did not answer the central question alluded to by the show’s title as to why people are afraid of Americans.

The small audience were divided into two camps – some on the front row who laughed a lot. And the remainder who did not. Asking a couple of audience members outside what they thought of the show, I simply got the reply ‘it was an hour of my life I won’t be getting back!’

The space used was great for stand-up and I did feel Joseph engaged well with the audience in terms of eye contact and asking the odd question. Overall, he had a confident approach and used the stage well. However, only part of the theatre space was used for seating on the preview night, so it would be interesting to see if the engagement is as good when the venue is fuller.

The show seemed like a copy and paste of a show he had staged in the US or elsewhere. ‘A perfect show for Americans who don’t take their country or government too seriously‘ seems an odd show description to use in Edinburgh unless he was expecting a lot of US expats to see the show. Too many cultural references were not explained, and the section on school shooting drew a couple of breaths, perhaps given the Dunblane sensitivities. Overall, the show lacked original insight, and felt like a series of unconnected observations rather than a well thought-out show.

Joseph perhaps wanted to come across as a well-meaning left-thinking American expat. But instead he came over as too apologetic; too many jokes and stories started or ended with a throw-away comment about how other audiences found them unfunny. He ended the show by saying ‘I thought I would end the show by telling a joke’. Which would have been a good way to start a comedy show.