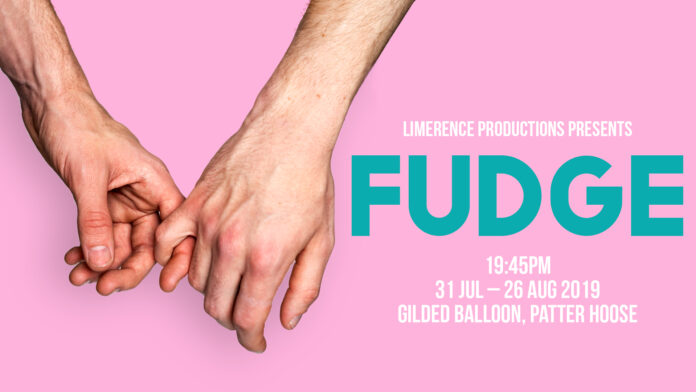 We are pleased to say that for our first review of Fringe 2019, Fudge ‘nudges’ in with an overall 3.6 to give them a 4 star review. Given this was their first preview show, a very solid performance from the gang at Limerence productions. This is a show that should have a broader appeal beyond its core LGBT audience, and its quick pace, solid content, humour and insights into modern gay life deserve to be seen.

This was perhaps my one and only issue with the show. The show promised ‘an honest, warm and witty exploration of the difficulties of gay celibacy’, but celibacy transpired to be just a side issue, a plot device at best. At the show’s core was unrequited love, and of self-realisation. And there is nothing wrong with that, indeed to me it would have made much more sense to have this as the central message of the show.

The ending came abruptly and without the conclusion I was expecting. It did feel somewhat unfinished though, but life is messy, and the lives of the three characters certainly were. So maybe less an ending and more a beginning for Charlie’s character. Maybe I am getting old, but the connection between the show’s title and the show’s content also passed me by. Answers on a postcard please!

The audience were visibly engaged throughout, laughing along with the jokes, and greeted the actors on stage at the encore with rapturous applause. The story was very fast paced, and the audience got carried along well with it. Smiles all round when the lights came on!

A simple set that transported you instantly into the world of a chaotic, messy house share. There was a good use of space and costume changes, and there was nothing wrong in approach or execution, but to reach the four and five star level in this category, I was looking for something a little more innovative and memorable.

The show had some very innovative sections. I loved the musical indents, and it really worked well within the context of an LGBT show. For that matter, it would work well in any show; I mean, who doesn’t want to dance along to Kate Bush? As mentioned above, the gay celibacy angle could have perhaps been explored in a little more depth, but the originality showed in the character constructs, and the inter-dependencies between them helped push ‘Fudge’ back into four star ratings territory.

Some good solid performances – the cast had the difficult task of getting the audience quickly up-to-speed with the complex lives of the housemates, but they did this well, and steered clear of stereotyping to give us very believable, rounded characters. There were occasions where opening night nerves and doubts showed, but this was a preview show so the cast can be forgiven on that front. The company’s lead gave a very credible performance as a lovelorn Charlie, as did Ned Costello and Rosanna Hitchin as Charlie’s housemates.