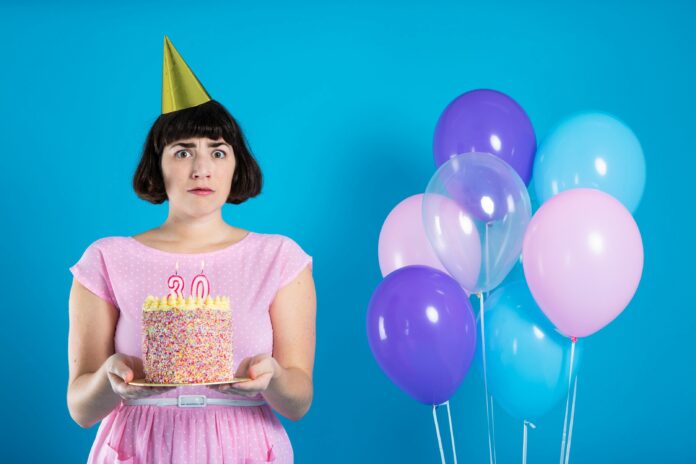 Today we meet the amazing Sadie Clark who has written a wonderful new play called ‘Algorithms‘, “for anyone who’s wondered why they feel so lonely when connecting with others is meant to be easier than ever”. A “bisexual Bridget Jones for the online generation”, this tragicomic one-woman play will appeal to many who have wondered at what stage in their life they will finally feel connected, ‘grown-up’, and ‘happy’. This engaging interview and amazing trailer will, we are sure, see many of you buying tickets for the show!

I’m Sadie Clark and I’m the writer and performer of Algorithms: a bisexual Bridget Jones for the online generation. It’s a tragic-comic one woman show that follows Brooke, the algorithm writer for an online dating site, as she struggles to find love, happiness and connection in a world defined more and more by online interactions.

It’s an honest and relatable look at the hell of trying to ‘get it right’ in this online world of endlessly Instagrammed perfection… but if you come for anything, come for the jubilant and exultant end, which is sure to put you in a good mood, even on one of those exhausting Fringe days where you’ve lined up five shows to see!

Finding true love… KIDDING! That’s Brooke (my character’s) aim – we’ve actually got a fun little marketing campaign for that going on. Hmmm… a successful Fringe run… of course it would be nice to win an award or get a five star review but honestly, a successful Fringe will be hearing from audiences who love the show because it’s made them feel a little less alone. I wrote the show to try express some of the frustrations and anxiety I was experiencing related to online dating and social media. I thought I might be the only person feeling those things but sharing the work as I’ve been developing it has shown me so many people have felt similar things. A successful Fringe will be one where audiences come up to tell me they’ve felt the same way – a reminder that we’re never alone!

1. Pack warm and waterproof clothes! The first time I went up to the Fringe I had no idea it basically has its own ever-changing micro-climate. I ended up having to buy a jumper, jeans, raincoat and a scarf to keep warm flyering…

2. Schedule, schedule, schedule. I mean, this might just be a top tip for me because I bloody love a colour-coded spreadsheet … but with so much going on in different parts of the city and some things selling out in advance I would advise sitting down and thoroughly planning what you’ll see when.

3. I’m going to regret offering this up as a top tip because all of these places are already so busy… and I’m essentially giving you three for one here but treat yourself to: a milkshake at Black Medicine Coffee, the best vegan food at Lucky Pig and comforting Thai food at Ting Thai Caravan.

Your play is about turning 30. Much has been written recently about how we are still teenagers into our 20s. Do you consider 30 to be the hardest birthday in that you finally have to accept you are an adult?

I think it’s the hardest birthday because there’s so much external pressure to have ‘got it together’ by then. There’s this narrative in pop culture that it’s this ‘milestone birthday’ and after it you should be a cool, calm, collected individual who remembers to pay their council tax on time. I think Bridget Jones was so popular because it was such an honest look at not having your shit together in your thirties.

I don’t think I’ll be able to accept I’m an adult until I stop calling my Mum to ask for her advice every five minutes though… and I do think it’s hard for my generation to see themselves as adults because we seem so screwed when it comes to financial and job security. Especially those of us trying to survive in London; we’re not in the same position many of our parents were in at our age so instead of getting a mortgage and having kids we’re still flat sharing and buying pot plants…

But do we ever have to accept we’re grown up adults? I’m gonna ring my mum after this and ask her…

That there’s no algorithm for the perfect life… the best thing you can do is just do you.

Bridget Jones infamously struggled with the London dating scene. Do you think it is harder to date in London than elsewhere?

There’s a line in the play about the dating scene “you’d think it would be easy in London with so many people but it isn’t… It’s almost like everyone has too much choice” and I think that quite aptly sums up my feelings about the London dating scene. There was an analogy I read in a book for part of my research about jam – they offered people 10 choices of jam in one area of a supermarket and 3 choices of jam in another. Where there were only 3 choices of jam to choose from, significantly more customers ended up buying jam. So basically what I’m saying is London is a table with 8 million jams on it and no one wants to pick a jam to buy in case one of the other jams they haven’t tried yet is better…

Everyone’s exhausted too: I’m exhausted, the person I’m trying to arrange a date with is exhausted, we’re all so busy – we’re trying to schedule dates for two weeks in advance because that’s our next free night but if I’m honest all I probably want to do on that night off is put my PJs on and watch Jane the Virgin.

You describe the heroine of the play ‘Brooke’ as a ‘bisexual Bridget Jones for an online generation’. Bisexuality perhaps doesn’t get the visibility of L or G in the sexuality spectrum. Does your play seek to explore bi issues?

Oh it absolutely doesn’t get the same visibility as the L and G of LGBT. Our sexuality constantly gets erased, ignored and questioned in the media and pop culture.

I wouldn’t say the play explores bi issues… I don’t delve into why we’re still being erased and stereotyped or why we have poorer mental health or why we don’t receive as much funding. Instead I’ve written a messy, complex character who happens to be bisexual. But it doesn’t define her: it’s just a part of who she is and she has a story to tell, which I hope is a universally relatable story of love and loneliness. The activism of my piece (if you will) comes from putting that bisexual character unapologetically centre stage, visibly dating people of all genders. It does make a few points that challenge or highlight some of the difficulties bi people face but they are not the basis of the show. Straight people get to tell universal stories unrelated to their sexuality all the time… I think it’s important under-represented groups get to tell universal stories too.

What are the difficulties people experience dating as a bi person?

The bisexual community is so diverse I can only speak from my experiences dating as a feminine looking bi woman but the three biggest things I’ve encountered are:

You can follow us @AlgorithmsPlay on Facebook, Twitter and Instagram, and I’m @SadieLeylaClark on Twitter and Instagram. We’ve got previews coming up at The Undercroft on June 29th as part of Peterborough Pride Festival, at the Old Red Lion, London on July 12th and the Omnibus Theatre, London on July 18th, and finally at Norwich Puppet Theatre on July 25th. I’m also running free play writing workshops for Bisexual+ people in Peterborough and London in June and July so do follow me if you’d like to find out how you can come along to one of those.

You can catch the show in Edinburgh at the Pleasance Courtyard (Baby Grand) at 12:45pm every day of the festival except the 13th August. We’ve also got relaxed and captioned performances on the 14th and 20th August.

Algorithms will be performed daily at 12:45 at the Pleasance Courtyard (Baby Grand/ Venue 33) from July 31st- August 12th and from August 14th-26th. Tickets available now from the Fringe Box Office.