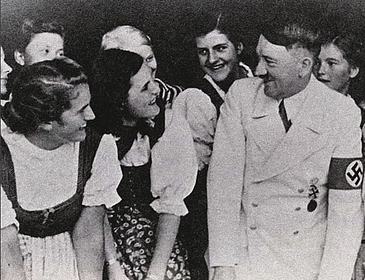 Today we meet Michelle Kholos Brooks. Michelle wrote Hitler’s Tasters, a dark comedy centered on a group of young girls who tested the Führer’s food for poison. The New Light Theater Project will be performing the play at the Greenside@Infirmary Street at this summer’s Fringe. The team behind the play have already started an active marketing campaign on social media, and it is clear they are very excited about the production and the story they have to tell!

Can you introduce yourself and your show (Hitler’s Tasters) ?

My name is Michelle Kholos Brooks and I wrote this dark comedy called, Hitler’s Tasters. When I first heard that Hitler used young German women to test his food for poison, I thought, “Isn’t adolescence hard enough?” And what do girls discuss as they wait to see if they will live through another meal?  Like all girls, throughout time, they gossip and dream, they question and dance. Deliberately anachronistic, and stretching across time, Hitler’s Food Tasters want to love, laugh, and above all, they want to survive.

Hitler’s Tasters offers a human face during a horrible time. The girls who were forced to be Adolph Hitler’s food tasters are not simply sepia toned people in history.  If they came of age in 2019, these girls would be taking selfies, posting on Instagram and searching for love and meaning. They are us. If we can humanize and understand people of the past, perhaps we can avoid catastrophic mistakes in the future.

We’re really excited to share Hitler’s Tasters with an international audience and just getting that opportunity feels like an accomplishment. Also, we have six women sharing one bathroom so “success” means everyone lives to see the end of the festival.

4. Have you performed at the Fringe before? What is the worst rumour you have heard about performing at the Edinburgh Fringe?

None of us have performed at the Fringe before! The worst rumour we’ve heard is that our show could get lost in the mix. But there’s only 4,000 other shows so what could possibly go wrong?

People often question whether they would kill Hitler if they could travel back in time. Do you think the world would have been a better place if the tasters had failed and Hitler had been poisoned, or better to let history take its course?

Honestly, if I had a time machine, I would go back and buy some of Hitler’s paintings. He was a frustrated artist and many historians wonder how his life would have played out had he been a successful painter. I would say, “You’re brilliant! Your use of light and color is groundbreaking! Don’t lose your focus, spend every hour of every day painting!”

You describe your show as a ‘dark comedy’. This is often said to be the most difficult form of comedy – is building empathy with the audience key?

A dark comedy is definitely challenging. Sometimes people want to laugh but the material is so dark that they’re afraid they’ll look unsympathetic. However, sometimes laughter doesn’t happen just because something is funny. Sometimes it’s a deep realization of truth. I’ve heard it said that our greatest defense is to laugh in the face of fear.

I agree that building empathy is essential. The audience absolutely has to be invested in the characters in order to be able to laugh and cry with them. Our goal is for you to feel deeply when you see Hitler’s Tasters. Whatever gets you there is okay by us.

The women of Hitler’s Tasters have put together a fantastic social media campaign! Follow us on twitter and Instagram #ht_theplay. We have a Facebook page and website.www.hitlerstasterstheplay.com Check out all the videos the girls have put together, including behind the scenes show footage and a fundraising campaign that was by all accounts, successful AND adorable. Also, before Edinburgh Fringe we will perform in Chicago and at a pre- Fringe festival in New York, so we are building on our audience that followed us from New Light Theater Project’s previous run in NYC last fall.

And you should check out our Hitler’s Tasters vegetarian cookbook! Look for it when you come to see our show!

In your research for your show did you come across any interesting facts about the girls or Hitler’s diet?

I knew that Hitler was a vegetarian, but what I didn’t realize was that he was a bit of a selective vegetarian. He was particularly fond of pigeon. Yuck. Also, he did not like to eat meals with his cabinet, preferring to eat with his secretary or someone with whom he didn’t have to talk strategy and world domination. He had a lot of stomach issues.

Yes, please! We are going to be at the Olive Theatre @ Greenside Infirmary. Hitler’s Tasters runs from August 2-24 and our time slot is 18:35. We’ll look for you there!

Hitler’s Tasters will be performed at the Greenside@Infirmary Street from August 2nd-10th, 12th-17th and 19th-24th. Tickets available from the Fringe Box Office