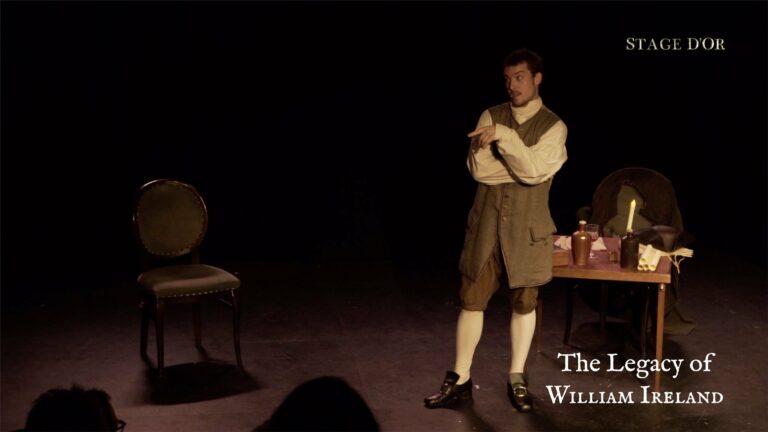 I nearly didn’t make this review. In typical Fringe fashion I thought half an hour was sufficient to get from the Tron to Riddle’s Court – a five minute walk in Winter. But after one conversation too many with the marketeers handing out the flyers, I found myself dashing with a minute to spare up the final stretch of the Royal Mile and into the darkened courtyards of Riddle’s Court and up the spiral staircase to the venue. The historic surrounds were immediate and it really did feel like stepping back in time. No sooner had I taken my place, than Charlie Jack exploded into the room – in full costume as William Ireland, bursting to tell us his tale. And what a fantastic story it was, the monologue written by acclaimed playwright Tom Connery, and inspired by the real events of 1796 when the poetic ‘genius’ William Ireland tried to pass off his own writing as Shakespeare’s and created a near riot at Drury Lane Theatre. The one-man play recreates the moment William Ireland flees the scene, justifying his actions to the audience, sometimes seeking for pity, other times for affirmation. A powerful, intense and very believable performance from Charlie Jack, who brought a little known misunderstood blaggard from history back to life on stage.

A solid retelling of the William Ireland tale to audiences who are inevitably largely unaware of the misdeeds of Mr Ireland. The story telling gave insight into Ireland’s background as an unwanted abused son, who forged the Shakespeare letters and play largely to win over the respect and attention of his austere Father. The threads of the monologue tied up well at the end, and as a whole produced a compelling, engaging narrative.

The audience were visibly engaged throughout, laughing along with the jokes, and listening acutely to the more intense sections of the monologue. Visibly happy faces at the end and a warm round of applause.

A simple set that transported you instantly into the world of a panicked William Ireland. Whether planned or not, the Q2 stage of Riddle’s Court with its beautiful ceiling and lighting really transported you back to the Georgian era, and the simple writer’s desk, dark lighting and closed space added to the feeling that an 18th century lynching mob were on their way!

The show was excellent at achieving what it set out to do, and was well-executed. To reach four and five stars of originality rating, however, the show would have needed to include an element of surprise and innovation, which unfortunately it did not accomplish.

An incredible solid performance from Charlie Jack. It is no easy feat to hold the attention of an audience for an hour when you are the only performer on stage, but Charlie’s acting skills more than passed muster . His ability to command the stage, deliver a fast-paced monologue and engage the audience to elicit both laughter and empathy all deserve credit.