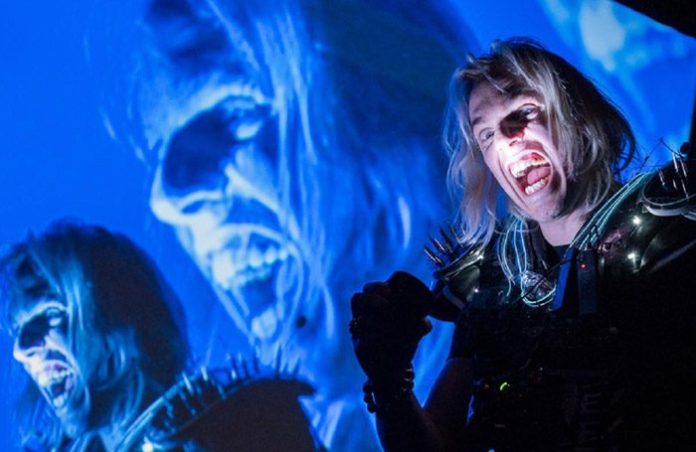 So I was a little surprised when he choose ‘Dark Room (for Kids)’ from his ‘approved list’ of 12+ rated shows.

‘Tom, you do realise this is not like the games you play? Do you remember Chuckie Egg and Donkey Kong that we showed you last Christmas? Well, this would be a show with a game from that era…possibly slightly before!’

He was determined. So off we went to the Gilded Balloon.

I must admit, I had no clue as to what to expect. In my mind something like Dungeon Master but run by a teenage nerd.

To my surprise, the venue was packed. And it was not a room behind some out-of-the-way pub bar. No, this was the Gilded Balloon and the packed excited room had the anticipation of a junior ComiCon about to meet Batman.

The high octane show is interactive and full throttle from the start. After a brief intro, the show starts with audience members getting to choose one of four options on screen. The retro feel of the show comes across as a mix of a 1980s children’s show and a late night version of the Crystal Maze.

And you know what? It works. Whilst the afternoon show is aimed at early teenagers, and the late show aimed at drunk adults, it could be argued that both groups have a lot in common. Both groups love shouting, heckling, booing, chanting a couple of memorable catch phrases and both have a seeming inability to make logical choices. Despite this, John is supreme master of ceremonies to all of this and goads the crowd along, and there is genuinely never a dull moment; even if you are not a twelve year old boy or drunk!

Well I am pleased to say my nephew ‘Darren’, not only got chosen to take part, but actually won a prize (a lovely cd collection of panpipe music!). Thank goodness he impressed John with his taste in music as a Joy Division fan and the prize wasn’t the baked beans or the abandoned rug!

The biggest surprise for me was when the lights came on at the end of the show. I was expecting a bald real-ale Kiss fan doing a Richard O’Brien impression. Instead, a rather buff blond Australian stepped forward. He seemed like a really genuine guy and was happy to take photos in character with the kids.

I’ve heard he also does a late-night show, but probably not one of those far-out, crazy Fringe shows where the performer ends up in Hunter Square at midnight covered in butter and baked beans…oh wait.

Back to the Dark Room. All in all, a great show, and I am not surprised it has gathered a cult following among Fringe goers. There could arguably have been greater variety in the starter questions but simplicity works best for a live show with children. So ‘go North’, ‘don’t switch on the light switch’ of The Dark Room and sit back and enjoy this unique retro Fringe experience!