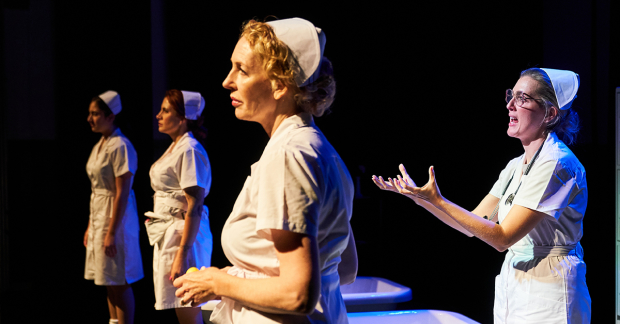 We can all be wrong about things. For the entire play, I was annoyed by the actors of Drowning pronouncing Linz in Austria as ‘lines’. But you know what? I was wrong – I had presumed the ‘Angels of Death’ killings on which the play is based had taken place in Linz, whereas actually it was in Lainz Hospital, Vienna. I had presumed four American actresses could not pronounce German place names, and had closed my mind to the notion that there may have been a hospital called Lainz.

And perhaps this has been the play’s undoing this Fringe in terms of audience and critic feedback – that they have presumed in their minds that the play should be staged in a certain way, and end up disappointed when it is staged in a way that it counter to their preconceived notions.

Indeed, the feedback and reviewing has been so ‘controversial’ for this play, that we decided two of us from the EFC should attend the performance, to ensure we were unbiased and getting the right outcome against our review criteria.

The world premiere at Fringe of this new play written by Jessica Ross, directed by Steven Roy and executive produced by Matrix star Carrie-Anne Moss, scores an overall 3.6 from the EFC, giving it a 4 star rating. Overall, a brave production that deserves to be seen with an open mind.

In 1991, four Austrian nurses were charged with murdering 49 patients in their beds in Lainz hospital, but were suspected of killing up to 200. Ross’s play chronicles how this came to pass.

The show’s description asks three central questions : What makes a killer? What makes the yearning for connection and friendship so great that you would do anything? How does a mind justify the most terrifying act?

Whilst the narrative is solid, the flaw in its execution is that it does not relate back enough to these central questions. Too much time was spent in looking for backstories to explain how ‘angel’ nurses could kill. In reality, nurses kill all the time. Male surgeons kill, female GPs kill, male nurses kill. Rich medics kill. Poor medics kill.

The two obvious themes here which the central questions in the show’s description allude to are power and normalisation.

On power, there are comparisons here with Harold Shipman, one of the most prolific serial killers in history, and also a medical professional. He too witnessed at an early age the pain of a loved one with an incurable condition and the ‘kind release’ of death. He too killed for pleasure and power, with the prosecuting QC stating “He was exercising the ultimate power of controlling life and death and repeated the act so often he must have found the drama of taking life to his taste.” In ‘Drowning’ we could see briefly how the power of killing and deciding which patients lived and which died, but not enough. Again, the power dynamics of the nurses was briefly on display, but not enough to explain why the ‘weaker’ nurses were coerced by Waltraud Wagner into murdering patients.

On normalisation, the Third Wave and Stanford Prison experiments have shown how quickly ‘extreme’ behaviours become normalised, especially in group dynamics. This was hinted at in the play, but again somewhat hidden in the sub plots as to why some nurses ended up as ‘leaders’ in the group and others as ‘followers’.

By focusing on these subplots in the narrative, the play has in my opinion opened itself up to criticism that it ‘stereotypes women’ or does not explain ‘why women kill’. Perhaps the awful truth of the play and the real answer as Stanford and Third Wave showed, is that if the circumstances and group dynamics align, we are all capable of murder, whatever our background.

Prima facie, ‘Drowning’ should have received four or even five stars for their audience engagement. The team have done some commendable work with their #WomenOfFringe initiative. It is great to see the team meeting the audiences after the show too, and discussing the production and its themes. Unfortunately though, at some level, we need to reflect the mixed feedback the show has received from audiences, which in turn is perhaps reflective of the three star rating we have given the content and its failure to be coherent on its central theme and messaging.

Again, an audience divider. I, as editor, loved the ‘Deutschland’83’ style musical interludes and the simplistic set using bathtubs, my co-reviewer did not. “Sweet dreams are made of this” playing in between scenes goes perhaps beyond irony and ventures into dark humour which was felt by some to spoil the dramatic effect of the previous act. However, looking critically at whether the simplistic, clinical set design accentuated the themes and motif of the play, I would argue it did, and the set design wonderfully transported the the minds of the audience into an austere 1980s hospital.

The very fact that so many Fringe-goers are talking about this play, for better or worse, is an indication as to just how innovative and original this play is. Firstly, it scores highly for the originality of its staging. Secondly, this was a brave choice of theme and one which perhaps sets the production up for a fall; to ask a question that cannot be definitively answered in an age which likes conclusion and closure is likely to attract critics in swarms. But the originality here in my opinion, is the fortitude of the production team to stage the play and then hold up the mirror to the audience and ask ‘what do you think?’ In a world that likes easy answers, the response back was never likely to be totally positive.

There were some deficiencies in delivery in the way that some scenes were overacted, but certainly not to the extent to rate the actors performances as average or below par. Overall, some very strong performances on a very difficult subject matter.