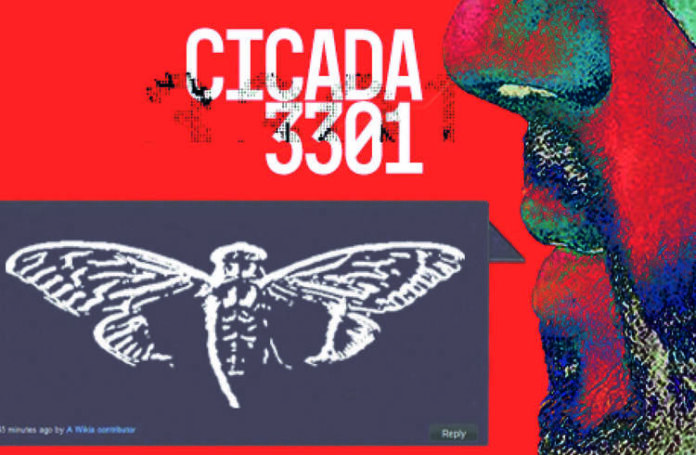 What’s the best way to scare your anonymous reviewer? How about having a cast member mid-performance stand two feet away from your editor, take his photo, put it on a CSI type board in front of an audience of 100, then ask ‘let’s use facial recognition to see what information we can find on him online?’ Hand -on-heart, this was an excellent method!

Thankfully the ‘online investigation’ proved to be a bluff, and our editor got his Polaroid photo back as a souvenir at the end of the show! Offline data privacy in action!

And when it comes to online data privacy, these guys know their stuff, and have brought a theme centre stage that many in theatreland may have shied away from. This incredibly well-scripted play, brings to life the infamous Cicada 3301 internet phenomenon in unexpected and ingenious ways. This production scores our highest points for originality and should have massive cross appeal beyond its obvious IT core; from puzzle/ sudoku enthusiasts to linguists, from lovers of theatre to Dan Brown fans.  Cicada 3301 deserves to attain ‘Fringe classic’ status, and I for one will remember this play long after the final curtain has been drawn.

A fantastic production and a must-see!

Cicada 3301 is a play devised around one of the most mysterious, still unsolved Internet puzzles. When Cicada 3301 first appeared in January 2012 with a picture posted on Reddit, it immediately caught the imagination of many, including the future scriptwriters from Cambridge University Fishbowl Theatre. A single image became one of the Internet’s most enduring puzzles; a scavenger hunt that has led competitors across the web, and into uncharted areas of the darknet. Cicada 3301 is a play centred on solving this gigantic puzzle, but also about obsession, the human desire for purpose, and the search for order in chaos.

The narrative was well-written and its frenetic pace managed to carry the audience along with it.

There was some confusion in the relationship between ‘Billy’ and ‘Hannah’ that I would suggest needs resolving before the production is re-run, as it was not clear to me what the source of tension was that existed between them.

Overall though, a very clever plot with an unexpected cliff hanger ending, that really made the audience question what they would have done, should they have been faced with the same dilemma.  With a few character and plot tweaks, this production is crying out to be made into a TV drama.

This was an intense plot, and audience engagement was high. I must admit to being slightly lost on some of the more technical elements, and did feel that an audience handout on seats ahead of the show opening could have helped, giving a few bullet points on the more complex terms used in the play such as ‘pgp’. Overall though, great audience interaction during the show, and the beginnings of a cult following with their clever marketing, especially if they expand on their existing concept of making performances ‘interactive’ by hiding messages for the audience to find within the script , posters and on social media.

The production made excellent use of the space on stage. We had concerns on taking our seats that we would not be able to see the writing on the whiteboard which was centre stage – these fears were unfounded however, as it was not necessary to read anything on the board to understand the plot. Excellent use of props too to mimic various aspects of the internet in real life. Congratulations to co-directors Issy Snape and Aaron Kilercioglu, and producer Theo Sawkins for staging such a stand out Fringe performance.

Cicada 3301 is a highly innovative production, that thoroughly deserves the highest score for originality. The marketing of the production caught our eye too, and in fact the poster for Cicada 3301  was nominated for our annual Fringe Poster award, with it’s clever and thought provoking combination of puzzle and design.  This isn’t just one big puzzle on stage though, there were some very nuanced characters developed and at the heart of this production was an incredibly well acted play by four very talented individuals. The innovation in staging also deserves the highest praise, and the creative thinking that brought life to the ‘dark web’ and ‘Skype calls’ was genius.  The play has a refreshing gender split too given its tech focus.

Convincing character acting all round, a fantastic cast who brought the energy and enthusiasm needed by the script, with stand out performances from Bilal Hasna and Georgia Vyvyan.  The timing and delivery of lines was almost faultless, and the cast were able to successfully transition between the more intense stressed group scenes, to the more lighthearted duologues that peppered the script.