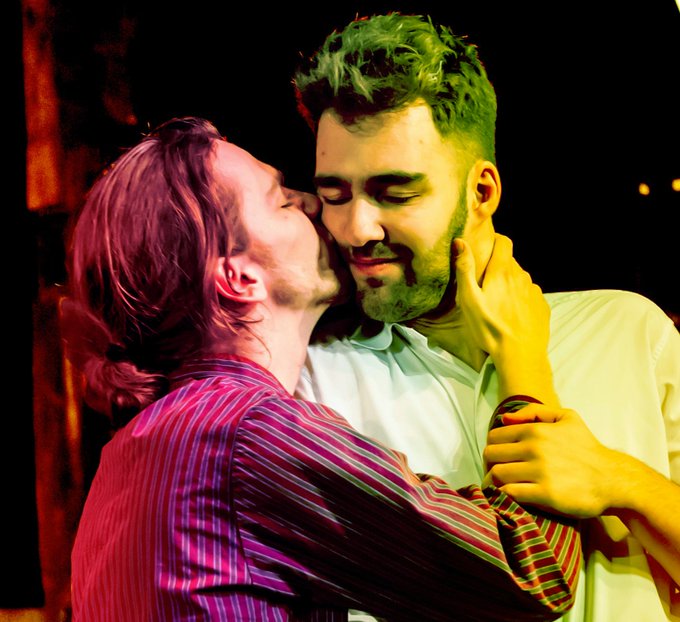 Making their Edinburgh Fringe debut, Paper Mug Theatre have brought writer/ performer Rory Thomas-Howes’ ‘A Partnership‘ to the Gilded Balloon this August. This two-hander play poses the central question of ‘Can two men in modern-day London have a long-lasting, monogamous relationship?’. In real-time over an hour, on the eve of a 30th birthday, the two partners question what is ‘normal’ in a relationship, and the cracks start to appear in their coupling. They resolve to determine whether they should stay together by the time their takeaway meal arrives.

Zach and Ally are a lawyer and a nurse who have been together for nine years and just bought a new flat in London. This two-hander duologue is set on the eve of Ally turning 30. A series of awkward revelations results in them resolving to figure out if their relationship can be saved before their Indian takeaway is delivered. The writing was great and included many unexpected moments of hilarity. It tried to address a somewhat unexplored theme of the struggles of being in a long term monogamous gay relationship. That it did to some extent, but the narrative was far too busy ping-ponging from themes of bisexuality, domestic abuse, monogamy, fears of ageing, gay marriage, affairs, internalised homophobia, externalised homophobia,impotence, grief, and defining sexual roles to explore the central theme in any depth. The main complaint at the start of the play from Ally was that their lives had got boring, but with so much going on in their lives, this seemed difficult to believe. And on some of the issues raised, such as domestic abuse, it seemed odd that more time was not given to discuss what had just occurred.

The ending would have been perfect if not for the above; the two characters came across unintentionally dysfunctional, maybe even unlikeable by the end of the play, so that the audience’s empathy was somewhat reduced as to whether or not they survived as a couple. Nethertheless, Rory Thomas-Howes’ writing for the majority part was strong and he crafted a great framework for the play’s narrative, but perhaps a case of ‘less is more’ for this particular production.

The audience on the day I reviewed was reasonably full and they really enjoyed the lighter moments of the play, with a lot of genuine laughter to be heard. Speaking to a couple of audience members afterwards, they too had issues with the content but had all said they were glad they had seen the play.

The staging of this play was very simple – a few cardboard boxes unpacked from the move, perhaps symbolising the transition in the stability of their relationship. If the staging matched the actual plot, there would have been clutter everywhere, but if the original aim of the narrative was to show a couple bored with monogamy, then the minimalist staging worked.

“What makes two gay men stay together? We have a lot of gay theatre…what they tend to focus on is the coming out story, or the burgeoning sexuality story or the AIDS crisis…but what I think is being lost along the way is the ordinary life.” (Writer Rory Thomas-Howes) .

The creative thinking here was great, and it is admirable for Thomas-Howes to challenge the ‘norms’ in LGBT theatre with his innovative play. ‘IKEA gays’, those that shop as couples in IKEA on a Sunday rather than go clubbing on a Saturday are a growing silent majority, and it was a highly original approach to focus on this type of relationship. As noted above, the execution of the content perhaps did not live up to the ambition, and it would have been more in line with the original concept to discuss the prejudices gay couples receive from other gay friends for example, rather than branching into other themes. All in all, though a high score for the writer’s creativity and originality exhibited in this play.

Rory Thomas-Howes as lawyer Zach, and Ben Hadfield as nurse Ally give strong emotive performances, especially given the narrative is so fast-paced and moves incredulously from scenes of high tension to loving normality at the flick of a switch. Both actors artistic skills carried this and their empathy to the characters they were playing was clearly evident.