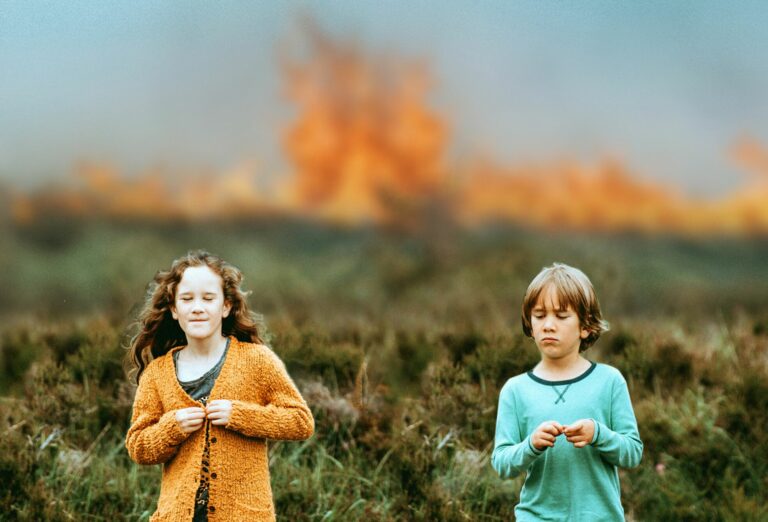 Today is the last day of the Royal Highland Show. A timely opportunity then to talk to Emily Jenkins, writer and director of ‘Bobby & Amy‘, which explores the impact that Foot and Mouth disease had on rural communities. A homage to the nineties, this new dark comedy explores themes and topics somewhat neglected at Fringe this year. Over to Emily to find out more.

Hi! My name is Emily Jenkins and I am the writer and director of Bobby & Amy – a new dark comedy about foot-and-mouth-disease. Set in rural England during the late nineties, Bobby & Amy is about friendship, heartache and it asks what happens when our way of life is threatened by those who don’t understand it.

Our actors are incredible! Kimberly Jarvis and Will Howard play not only Amy and Bobby respectively, but another 21 different characters all without a single prop or costume change. It’s so exciting to watch! It’s a funny and moving show all at the same time.

A successful fringe run, for me, would be for the audience to come out of the show and think: “Out of all the hundreds of shows I could have chosen to see today, I’m so glad I picked this one.”

The Fringe can be a crazy alcohol fuelled party – but you’re there to work, to help your career, to let people hear your voice and show them your art. Of course go out and party, but it’s ok to go home some nights and rest! Otherwise by the third week you’re going to be pretty damn knackered and the show will suffer.

2. Do a proper food shop and make yourself packed lunches.

Edinburgh is so expensive and if you’re out all day seeing shows it can be easier just to buy something to eat on the run. But after four weeks of eating out, your finances can really take a hit. No one wants to spend time in their digs making sandwiches, but your bank balance will be grateful in September!

3. It’s too windy for an umbrella – bring a raincoat! – and a waterproof rucksack!

The fringe can be amazing if it’s sunny, but when it’s raining it can be a nightmare. The wind sweeps through the roads and turns your brolly inside out. Get something waterproof with a hood, and make sure your rucksack is waterproof. I once damaged a MacBook beyond repair after thinking my bag was waterproof and flyering all day in the rain. THAT was an expensive mistake.

Your play centres around the impact on your home town in the aftermath of foot and mouth. Is that impact still being felt and relevant today?

Definitely. There’s been a major shift in the way of life in many rural – and urban – communities. In my town, for example, there used to be a farming community, but now it’s a weekend escape for people in the city. Privatisation has a lot to do with it. It’s still a beautiful place to be – there are art galleries, restaurants, great local walks and several pubs, but many of the people who grew up in the area have been left behind and work opportunities are minimal or tourism based.

I want to start a discussion around the importance of our rural communities and the contribution farming makes to our economy. However the central message of the play that Bobby and Amy learn is to fight for what you believe in, even if it feels like a losing battle.

There are many acts this year focusing on austerity, Brexit and Gender. But so far we have only encountered your show focusing on rural issues. Given agriculture is so important to Scotland, why do you think we see so few shows exploring rural themes?

Great question! I think people tend to forget about rural issues because politics, culture, and media are so city-centric. People think what happens out in the sticks doesn’t really matter but agriculture contributes £11 billion to our economy and 71 per cent of land in the UK is currently used for farming. We rely on agriculture for pretty much everything – food, drink, renewable energy, habitats for our wildlife, as well as providing 500,000 jobs, but it all tends to be ignored.

You state that your play is a homage to the nineties. The 90s to us was a fantastic decade – end of the cold war, peace in Northern Ireland, and great music where you could go out for an alcopop without a care in the world! Foot and Mouth aside, what made the 90s a great decade for you?

The nineties was a great decade. What I loved most though were the Spice Girls. I was obsessed. I loved the message they gave out about the importance of female friendship and girl power. I even made my mum queue with me outside Woolworths (RIP) when then film came out so I could get the VCR in a limited edition box tin – my one had Scary on the front!

We’ve got a quarter page advert in the fringe programme (check out page 353!) designed by the brilliant Flavia Fraser-Cannon and Malachy Luckie. The wonderful ladies of the play Drowning have created a #WomenOfFringe list, which we’re very proud to be featured in, and our PR is managed by the fierce Chloé Nelkin Consulting. Follow us on Facebook, Twitter or Instagram to hear our latest news and to see us most probably having far too much fun in the rehearsal room – @bobbyandamyplay

Bobby & Amy will be performed daily at 12:45 at the Pleasance Courtyard (Upstairs/ Venue 33) from July 31st-August 11th, and from August 13th-26th. Tickets available now from the Fringe Box Office.