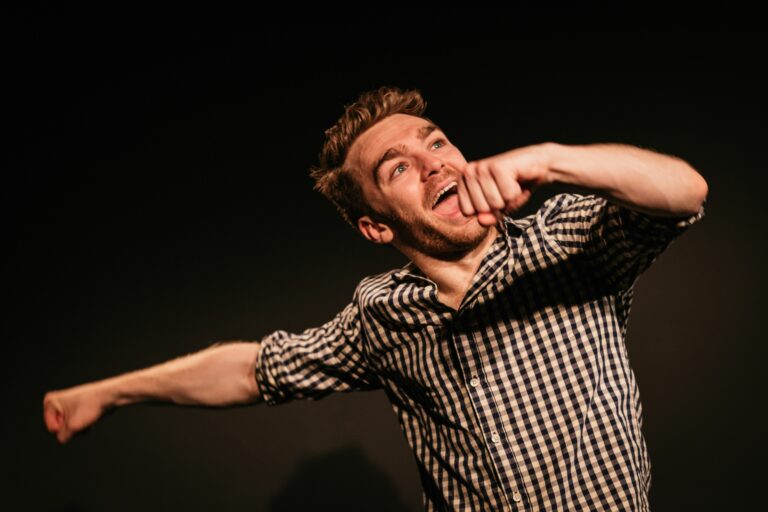 We are pleased to announce our second Five Star review of Fringe 2019 goes to ‘Brendan Galileo for Europe‘, who achieved an overall total of 4.6 thereby giving the show a 5 star review! We believe our review framework is robust enough to cover all show types and this production was a magnificent example of a small solo play that really punched above its weight, and one that we could truly say delivered at a five star level of performance and staging according to our review criteria.

The play written and performed by Fionn Foley was winner of the ‘Best Performer’ and ‘Bewley’s Little Gem’ awards at Dublin Fringe Festival 2018. In Edinburgh until August 26th, this is a glorious celebration of Irish comedy. Exceptionally well-scripted and directed it delivers laughs galore.

And in the best tradition of giving your maximum points to your neighbouring country…the 5 stars from the Scottish EFC jury go to…Ireland!

The story revolves around Brendan’s fight to save his granny’s music school and more widely, his campaign for his west-Galway hometown of Prospect to have a voice in Dublin and Brussels. To save the school from scheming politicians and developers, Brendan resolves to rekindle his electoral aspirations, this time for the European Parliament.

The play covered a lot of material that superficially come over on the surface as a comic caper, but equally hits home at a deeper level and touches on why Europe and its Union remains an aspirational ideal to many, including those on the perceived fringes.

The characters created by Fionn painted a vivid picture of life in small town Galway and the smatterings of Irish dialect and Gaeilge added the colour. Bhain mé an-taitneamh! (I really enjoyed it!)

On every seat was a flyer for the show and a two-pager giving extensive biographies of the writer, performer and sound engineer (Fionn Foley), director (Jeda de Brí), stage manager (Sinead Purcell), costume designer (Nicola Burke) and producer/ lighting designer (David Doyle) . This was a fantastic idea, as it gave the audience context and background to the show. Even if unintentionally, it gave the stalls the feeling of an election campaign, albeit with only one candidate. The audience engagement was great, and they really bought into the narrative and manic humour of the play. The applause and ovation at the end was genuine and in the words of an Irish audience member I overheard upon exiting the theatre, ‘Best feckin show I’ve seen at Fringe’. High praise indeed!

For a solo piece, the staging was wonderful and exceeded expectations. The offstage dialogues and characters (all adeptly voiced by Fionn) worked magnificently. The lighting and sound directors deserve high praise for their creative efforts., especially for the election and Eurovision stage sections.

In theory, this should have been a basic quest story play involving a simple local lad who comes good. A story we have heard perhaps a hundred times. Yet Fionn’s writing makes it much more than this, and gives the narrative twists and turns that earn it extra points for originality when set against the background of the current rise in popularism across Europe. The staging too demonstrated that the play aspired to be much more than the small-scale production it was; I particularly loved the section where Brendan travelled to Dublin!

Fionn Foley deserves the highest praise for the character of Brendan Galileo. Fionn gave everything in his performance, effortlessly transitioning from character to character, contorting and shaping his body during sections of physical comedy that left everyone breathless but Fionn, whilst putting heart and soul into the slower dialogue sections. His timing, empathy, delivery, and acting skills were to the highest level and he gave a stand-out performance that audiences will long remember.