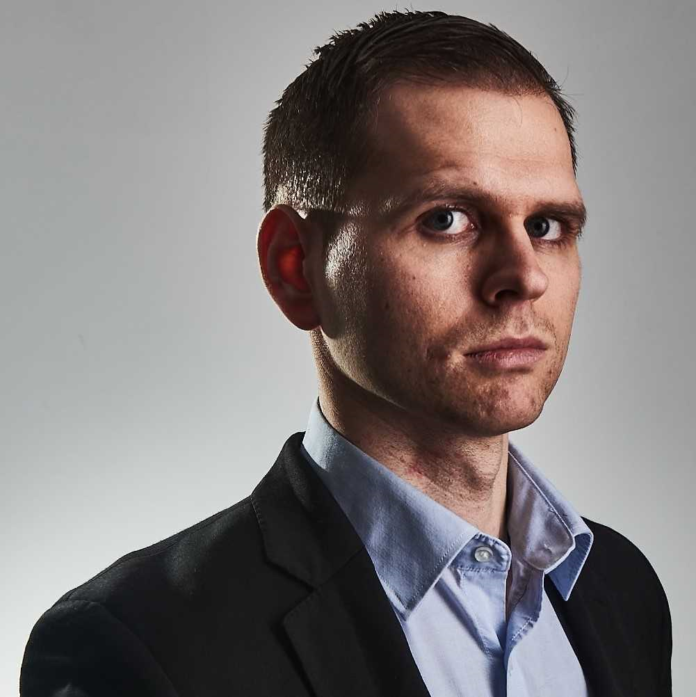 Another great interview today! Nick Everritt will be performing his show The Deconstruction this August at the Fringe. A trained actuary, he has swapped Excel spreadsheets for the stage, to help us deconstruct comedy. ‘Watch in awe as a man in a suit demonstrates his mastery of every genre of comedy’. Can an actuary be funny? We are 97.362% certain they can be!

1. Can you introduce yourself and your show (The Deconstruction)?
I’m a London-based actuary and comedian. My debut solo show, Nick Everritt: The Deconstruction, is a loving mockery of stand-up comedy. I perform every genre of comedy I can think of – puns, observational, political satire etc. – but I get each of them very, very wrong, hopefully in amusing and unexpected ways.
In short it’s a deadpan, meta, satirical deconstruction of the tropes and conventions of stand-up comedy with a strong yet not overwhelming hint of anti-comedy.

2. What is the top reason people should see the show?
Let’s say ‘Tim’ is at the Fringe and he wants to see a show. Tim’s seen lots of great stand-up shows, performed earnestly and enthusiastically by some very talented comedians. But now Tim fancies something a little bit different. So, Tim, if that is indeed your real name, why not see someone (lovingly) make fun of what all those other comedians are doing in the form of a self-referential parody of stand-up comedy?

3. What does a ‘successful Fringe run’ mean to you?
A successful Fringe for me would mean regularly performing to audiences of a ‘not embarrassing magnitude’, i.e. audiences large enough that I don’t feel the need to lie to my family and friends about it. I’d also like to enjoy myself and to leave the Fringe a better comedian than when I arrived.

4. What 3 top tips have you got for Edinburgh Fringe first timers?
My advice would be thus:
1) If you can, try to write a good show. People will enjoy a good show more than a bad show, and so you will get bigger, happier audiences with a good show and you’ll have a better time in the process. I for one will be doing my level best to deliver a good show at this year’s Fringe.
2) The Fringe can be a real roller coaster. You’ll experience the full gamut of emotions – dejection, shame, boredom, disdain, right the way back to dejection again. My advice would be to desensitise yourself to all emotion as soon as you can.
3) Just relax and have fun!

5. This is your first Fringe performing solo. How are you preparing?
The main thing I’ve been doing is taking a look at the bits of my show that aren’t as funny as the rest of it and seeing if I can make those bits funnier. I’ve also been working on my audience banter which should help build rapport – I can now make fun of most occupations.

6. Ken Dodd’s lawyer in his tax trial once famously quipped ‘Some accountants are comedians but comedians are never accountants.’ Are many of your fellow actuaries comedians?
I’m pleasantly surprised logical paradoxes are admissible in court. If I’m ever on trial I might use the “If this sentence is true, then I didn’t do it” line of defence.
I am indeed an actuary but I’m not aware of any other actuary comedians. I don’t talk about being an actuary much on stage because in my nine years in the profession nothing funny has ever happened.

7. How are you promoting your show in the run up to the Fringe?
I’m on Facebook @NickEverrittComedy. I also have two upcoming previews in London: 7:30pm on 8th July at Aces and Eights in Tufnell Park, and 9pm on 20th July at The Lord Stanley in Camden.

8. To hand out flyers on the Royal Mile or not to hand out flyers? What’s your top tip to create a buzz once in Edinburgh?
I shall certainly be flyering outside my venue – whether I brave the Mile is another matter. My top tip for creating buzz would be to build up a strong fan base before doing your debut hour, accumulate a solid list of media and PR contacts, and write a sharp, insightful and hilarious show that shows emotional depth and whose themes resonate with the key issues of the day. I of course have decided to do precisely the opposite of this.

9. Your stage persona is extremely deadpan! Are you the opposite offstage and what’s the most interesting night out you’ve ever had?
Offstage I’m a far more ebullient character, which I hope comes across in this interview. I’ve certainly had a few interesting nights out in my time. On one particular occasion I drank a full five pints of 5% continental lager, and let’s just say I was feeling dehydrated in the morning!

10. Lastly do you want to tell us where and when we can see the show?
I’ll be performing at 4:55pm on 1st-25th August (not Monday 12th) at Just the Tonic at The Caves, Just the Spare Room.

Nick Everritt (The Deconstruction) will be performed daily at 16:55 from August 1st-11th and August 13th-25th at Just the Tonic at the Caves (Just the Tonic Spare Room/ Venue 88). Tickets available from the Fringe Box Office.