The EFC TheEdinburghFringe.Com
Home Visiting the Fringe Visiting Edinburgh as an LGBT tourist

Edinburgh is a very welcoming city for all visitors, and those from the LGBT community might sometimes feel that there are no separate queer spaces, given the integration that happens in all the other pubs and bars.

In February, Scotland celebrates LGBT History Month with an excellent selection of programmes and activities right across the country, so you can enjoy everything from film screenings and debates to parties and ceilidhs. 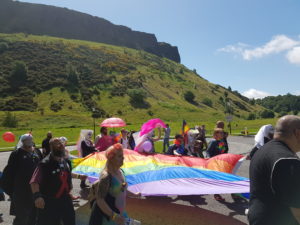 Edinburgh’s gay pride festivities, Pride Scotia, take place every June. The colourful parade sees people of all ages and walks of life march through the city, finishing with a festival which includes a BBQ, health and community fair, live music and entertainment.

Scotland’s capital city offers a year-round calendar of activities and events which peaks in summer with the fantastic festivals. They always include a wide variety of shows with an LGBT theme, from theatre and comedy to club nights and exhibitions.

Edinburgh has a small but friendly gay scene home to a number of great cafés, bars and restaurants.