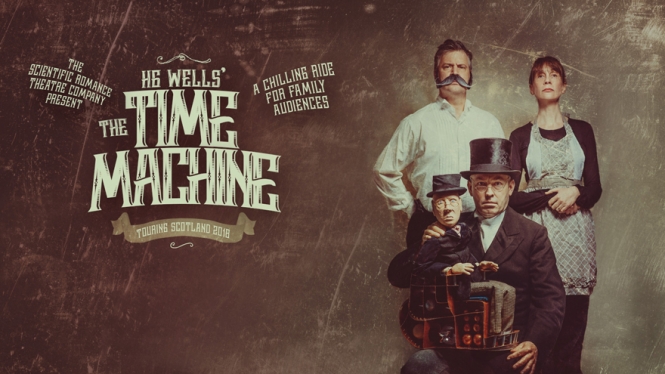 Where to take a 12 year old boy at the Fringe? That was the dilemma we faced last Saturday. And it is a dilemma many parents, grandparents, uncles and aunts face – clowns and sing-a-longs no longer hold an appeal and many Fringe shows are <cough> targeted at a mature audience; even some it would seem with a 12+ suitability guidance in the listings.

With some creative filtering on the Fringe website, and an approval stamp at the ready, we let our 12 year old Tom loose on the Ticketing site. After two quick picks and even hastier ‘adult content’ rejections, he stumbled upon ‘The Time Machine’. In hindsight he could not have picked a better show for his first Fringe experience.

The venue itself was very child friendly with lots of interactive displays in the waiting area to entertain and educate ahead of the show.

The team behind the show, collectively the Scientific Romance Theatre Company, are veterans of Scottish children’s theatre, so my expectations of the show were high.

The team had no easy task – to simplify H G Well’s complex novel and bring it to the small stage was not an easy problem to solve. Neither was making the well-known tale accessible to a young audience.

For the most part, the team succeeded. The team use a mixture of acting and puppetry to bring the novel to life. Deborah Arnott, Matt Rudkin and Rick Conte all gave assured performances, with stand out performance on the night coming from Deborah Arnott who played both the housekeeper and the Morlock leader.

At times the play’s themes become quite dark, with visuals, Victorian earnestness and eerie sound effects to match. This could be a problem for a younger audience, but the puppets brought a necessary comical interlude, especially Weena, the young Eloi who the Time Traveller befriends 800,000 years in the future.

Others have remarked that the set detracted from the story, and that a little bit more budget could have been spent on transforming the Victorian Living Room into a landscape from the future. I did not find this a distraction personally, and I am sure the younger audience members had adequate imaginations to compensate for this.

Overall, as an adult reviewer I would give the show four stars. That being said, I am not the target audience, and Tom, my ‘younger reviewer’ absolutely loved the show. In fact, he talked about it for at least two hours afterwards, wanted to read H G Wells, and asked at least a dozen questions as we made our way up the Royal Mile on the possibility of time travel, whether we would end up as Eloi or Morlocks and when we could see another show.

If the aim of the show was to encourage literacy, an interest in science and develop an early love of theatre, then the Scientific Romance Theatre Company have clearly won with this show. And for encouraging such interests in young people, I award an extra star!