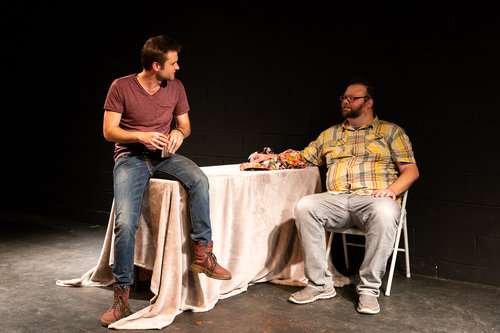 Gayface had somehow passed me by this year, and it was only in the last couple of days of the Fringe that word had got back to me how good it was, so I made the trip to see the Seeing Other People Production theatre company on what was their last performance of their run at the Fringe.

The key theme of this play is perception. Does the director perceive that a gay man can play a gay role? Does the playright perceive the leading star to be attractive? Will the audience perceive a big hairy bear as a leading man and want to buy into the show?

Sadly, life in some ways imitated art for this play, and there were probably some lessons learnt here for future Fringes around perception of the show, and how to bring audiences in. 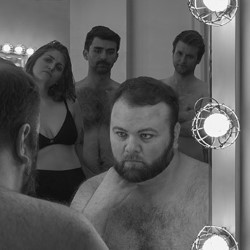 Firstly, I am not sure the photography used on the Fringe website and brochure did the show any favours. Whilst Scottish audiences might be aware of the word ‘pramface’, they probably would not have heard of ‘gayface’ before and equated an angry young single mum pushing a pram (Editor’s note : Urban dictionary’s definition not ours!) to the angry gay man in the photo, and therefore misinterpreted the play as something dark and sombre. In truth, the play was comedic and the brochure photo unfortunately did not reflect that.
Secondly, the play was not categorised as an LGBT production on the Fringe Website/app or in the brochure, so when people searched the website under ‘genre’ as LGBT it simply did not appear. It was therefore sadly invisible to those theatregoers at Fringe searching through the thousands of shows by filtering on the Fringe website or app, and the play’s core audience probably missed out on finding it.

All of which is a real shame because the production, writing and cast deserved a sell-out show every night.

The play opens with Hal, played by Chet Wilson, delivering his audition speech. He fears that his size will hold him back from playing the leading man in a romantic role. The guy playing his boyfriend is straight; from which the title of the play is derived; ‘gayface’ – a straight man playing gay.

The play twists and turns around the web of deceit that Hal has constructed to get the part. It turns into a well-written comedy farce around whether or not the director (played by Amity Hanson) will discover Hal’s secret, if the producer (played by London Bauman) and Hal will ever get together and whether the straight actor Jason (played by Ethan Cockrill) will see through Hal’s ‘performance’.

My only quibble with the play is the ending. If this is truly a celebration of diversity of body types, it only seemed right that the play would end with the producer and Hal ending up on stage at the end as lovers; a confirmation that Hal had accepted he could be loved, and that others would love him. Instead he ended up with Jason, somehow signalling that he had chosen the unobtainable straight male athletic body as his ideal. One could also argue though that the ending is also Jason’s and the audience’s acceptance of Hal as a leading man. My point regarding the ending is only a minor quibble though, and the ending they choose was a brave one, and I admire them for doing so.

There was some real acting talent on display here. Chet Wilson give an assured, powerful, stand-out performance as Hal, and London Bauman and Amity Hanson showed great ability and conviction in their roles. Rising star to watch here would I suspect be Ethan Cockrill; it is not easy to act well and ‘bad’ in one play, but he pulled it off with aplomb. Special mention too to the actor standing in for the flatmate; a great performance and seamless transition given the last-minute ask!

I really wanted to stay behind and talk to the company about their time in Edinburgh and the themes of the show, but alas another show was about to start across town! I really hope to see Seeing Other People Productions back at the Fringe next year and hope they enjoyed their first time performing here in Scotland!

All-in-all a first-rate production that will make you think as well as laugh. This play represents the Fringe as it was intended. Well-acted, well-scripted, well-worth seeing!