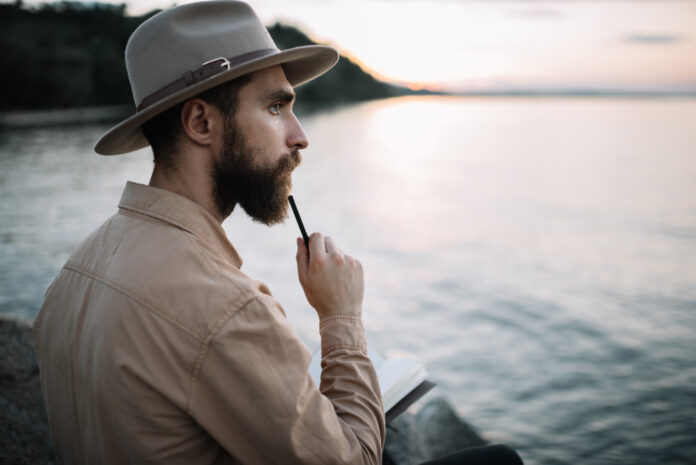 The Spoken Word category of shows contains such diversity and surprise, it is difficult to pick out just 10 shows. Removing the ‘In Conversation with‘ talks which we will deal with in separate lists, we are left with a wonderful mix of storytelling, rap, poetry, monologues, debate and prose. Selecting just 10 from this sublime category is difficult, but the following shows piqued our interest for their content, production and thought-provoking subject-matter.

Where better to start a list on Spoken Word shows than a play about the English language itself?

“A contemporary exploration on the journey of the English language. Interactive spoken word, monologues and creative conversations present a story that celebrates creativity and cultural diversity through the various uses of language. Take a trip through history visiting London, Africa and Europe, whilst Shakespeare, Equaino and the rest cultivate original and organic language and literature.”

An interesting question. We just tried the first question below, “What does it mean to be a human in the era of Google Translate?‘ into Google Translate from English to Gaelic and the answer was ‘Dè tha e a ’mar sin a-mach beag nad neach a gleusadh Google Translate?’ Translated back into English through Google Translate from Gaelic this came back as ‘What does it mean a little person to modify Google Translate?’ So in the answer to the second question, ” Is it really taking over human translation?“, probably not just yet! (Well, at least for Gaelic!) But we do not wish to be glib here – this is a serious question and has much wider questions than just translation. In answer to the last question, “Can you tell the difference between a text from a human and one written by a machine?“, maybe another question could be ‘how long before we see a Fringe show written by a machine, and would we be able to tell?’

“What does it mean to be a human in the era of Google Translate? Is it really taking over human translation? What if it isn’t just words after all? Can machines replicate human feelings and language nuances? Paola Ruffo (Heriot-Watt University) explores how the boundaries between humans, words and machines are being redrawn. Join her at the edges of the magic world of translation to discover what happens when humans and machines meet new languages. Can you tell the difference between a text from a human and one written by a machine?”

3/ Can you See Where I’m Coming From?

Fringe diversity is a constant theme, and rightly so. We often hear that there is not enough working class representation at Fringe, but what does that mean, and are those purporting to be working class truly representative of that class, or a projection of what we expect that representation to be? This show might provide some answers.

“Award-winning spoken word artist Melanie Branton performs poetry and songs about her roots and plays the recorder (the ultimate punk instrument) badly. But is she working class or middle class? Is nationality determined by ancestry, birth or choice? And what does identity mean, anyway? Aren’t we all fictional characters in a story we’ve made up to feel better about ourselves? “

This show sounds like a TED talk, and in theory that is no bad thing. Data and automation is everywhere, and there seems to be no reason why the creative arts should not be equally disrupted by the new Data Age. Yet there are likely to be opportunities in this new era of data too, and Nicola’s talk might give us some insights into where those opportunities can be found.

“Nicola Osborne (#CreativeInformatics, University of Edinburgh) reckons that data-driven technologies are inspiring new and unexpected opportunities for creative people and organisations to think about what they do, how they do it and how they make a living from doing what they love. Data will shape media, performance, crafts, whole new cultural experiences and forms of value. Do you agree? Do you know what data-driven technologies are? Is this all promising too much? Bring wild ideas, questions or your (data-driven) heckles! ‘A wonderfully witty and engaging speaker’ **** (BroadwayBaby.com). “

A couple of rave reviews last year, this mystical journey is shouting out like a siren call for those yet to see it.

“Calling all adventurers! Following their critical success at last year’s Fringe (selected as EdFringeReview.com’s Editors’ Pick), KinkyFish return to Edinburgh with The Mariner’s Song, and once again invite you to join writer-performer Rajan Sharma as he navigates classical mythology, family history, and his own experience crewing on a deep sea challenge. In this intimate spoken word performance contemplating humanity’s primal connection to oceans, rivers and seas, prepare to brave the elements, sail stormy waters, and embark upon a lyrical voyage through the ages… Will you answer the Mariner’s call? ‘Wonderful storytelling’ **** (EdFringeReview.com). ‘Beautiful and hypnotic’ (ThreeWeeks). “

Nan Shepherd – a writer of Scots, who wrote three stand-alone novels set in small, fictional communities in North Scotland. Find out more about the poet featured on the RBS £5 note!

An interesting concept and a universal theme. This poetry show should appeal to all.

“First commissioned for the Verve Poetry Festival, Playground is a full-length poetry and spoken word show that captures the sounds and experiences of growing up alongside friends and strangers. Featuring performers who went to school in four different countries, Playground highlights not just how universal some of those experiences are but also how adult life features its own kind of playground dynamics: camaraderie, isolation, reprieve and much, much more. The Second City Poets are award-winning writers and performers who first met at the University of Birmingham. In 2018 and ’19 their members won the national competition, UniSlam.“

8/ Rob Bell: An Introduction to Joy

Rob Bell is an influential man. So much so that Time Magazine named him one of the 100 Most Influential People in the World in 2011. He will be at Fringe for just three days at The Stand’s New Town Theatre from August 17th-19th. Whether you are religious or not, he has an interesting story to tell, and as the host of the number 1 spirituality podcast globally, you can be sure he will tell that story well!

“Former pastor Rob Bell is the New York Times bestselling author of Love Wins, What We Talk About When We Talk About God, The Zimzum of Love, How To Be Here and What is the Bible?. His podcast, RobCast, is the number one spirituality podcast. He’s been profiled in the New Yorker, toured with Oprah, and Time Magazine named him one of the 100 Most Influential People in the World. He has a regular show at Largo, the legendary LA club, and now brings his brilliant new show to the 2019 Fringe.“

For those wanting to hear about Scotland as it is, not the fairy tale castles, unicorns and Shetland ponies frolicking in heather that some would wish it to be, here is an opportunity to explore the real Caledonia. ‘Loki’ is perhaps Scotland’s foremost hip hop and rapper and his social commentary deserves your attention.

“Scotland Today, in association with Vivienne Clore, is the new live show from bestselling author and critically acclaimed hip-hop artist Darren McGarvey AKA Loki the Scottish rapper. McGarvey’s Fringe debut Poverty Safari Live was the breakout hit of 2018. The Orwell Prize winner returns with a unique blend of spoken word, comedy and music, offering his unique take on the state of the nation.“

No list of spoken word shows for a Scottish Fringe would be complete without a good ghost story. But its not just ghastly ghouls featuring in Dougie’s show, but a plethora of ‘ferocious Scottish beasties’. No hiding behind the sofa!

“Scotland is a country blessed with abundant natural beauty and mystical landscapes. Equally striking are the many supernatural wonders featured in Scotland’s traditional tales. Dougie Mackay shares stories of strange places full of fantastic creatures and curious characters, where the veil is thin and the people are wise, wild and terrifying. Come bathe in crystal clear waters, shift-shape and face the most ferocious Scottish beasties in a selection of marvellous tales, gathered from tradition and presented fresh for a modern audience. Sell-out show 2018. ‘A hidden gem at the heart of the Fringe’ **** (YoungPerspective.net). “