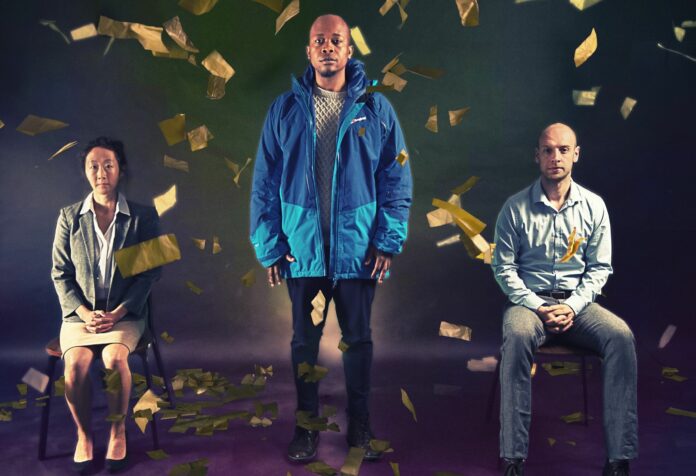 Today in our ‘Meet the Performers’ series we meet Tim Cowbury. His new show ‘The Claim‘ explores Britain’s Kafka-esque asylum system in a ‘comically absurd and quietly shattering journey’. Tim explains to us how he researched the play, and the messages he hopes comes across to its audiences.

I’m Tim Cowbury and I’m a playwright and theatre-maker behind The Claim. It’s a show I worked closely with director Mark Maughan to create over a couple of years and with the help of a lot of amazing performers, participants and experts. It’s about what happens when people try to claim asylum here in the UK and what this says about us as a nation. In some ways The Claim is an absurd fast-paced comedy, as two British characters attempt to interrogate and interpret the words of a Congolese man, mangling his story to ridiculous proportions in the process. But beneath the comedy of errors, word-play and misunderstanding there’s a gradually-unfolding tragedy and uncomfortable truth: this happens daily to refugees here as part of official policy, resulting from all-too-familiar prejudices, and it costs lives.

The Claim is a refreshingly entertaining and adventurous way to tackle a really serious and urgent issue. We play a slippery and slightly metatheatrical game with the audience, the performers looking you in the eye and talking to you in more languages than you think…! We try to avoid preaching to the converted and stereotypical representation: there have been a fair few shows exploring refugee experience over the years, but we think we can guarantee you haven’t seen one like this.

To be honest…lots of people coming! And The Claim getting under their skin, encouraging them to consider its themes in a new light. If the show can contribute in its own small way to people acting on what they’ve seen – getting involved in a wider shift in how the UK engages with people coming here in circumstances like Serge’s – then that’s more valuable than anything. Our run at Paines Plough’s Roundabout at Summerhall is already a continuation of the show’s life as it had a sell-out London run and UK tour in 2017-18. And there’s an ongoing conversation about doing a performance of the show for the Home Office, along with the potential of international tour dates as we’re in Edinburgh as part of the British Council’s biennial showcase. We’re definitely keen to take it to other venues in the UK too. The more the show happens, the more it can contribute to social and political change, however small that contribution might be.

Do you think the asylum process has improved or got worse for those seeing refuge in the UK since ‘The Claim’ was first written?

Sadly, I don’t think it’s really changed much yet – certainly the kind of situation that The Claim involves its audience in still captures what happens more often than not. There’s certainly more evidence than ever that the asylum process needs to change, but one of the absurdities The Claim is built on is that very clear evidence of fundamental problems has been mounting for years. The UN repeatedly called for change long before I began writing; as I was starting the first draft a global refugee emergency was declared; and since The Claim’s premiere the Windrush scandal has come and gone and we’re seeing new disturbing imagery emerging from the USA too. Small things shift, but what campaigners and whistle-blowers have long been calling a ‘culture of disbelief’ seems to still reign.

That the problem goes deeper than the Home Office, than bureaucracy – despite that being a big part of it. The problem is ingrained in our Britishness: the noble and civilised values we tell ourselves we stand for, the chatty politeness we cloak our prejudices and problematic national history in. The problem, unfortunately, is partly us, and the way we see ourselves in the world. I include myself in this. The Claim plays a game with these kinds of messages, which is a slippery and sometimes uneasy thing to do. But I hope it means the message isn’t an annoyingly obvious or reductively simple one.

You have worked on collaborative projects with groups such as Freedom from Torture and Right to Remain. Tell us about the experience.

The Claim wouldn’t be what it is without groups like these: we first engaged with them in early research when we wanted to get clued up. Through them and other groups like GRAMNet, Counterpoints Arts and Detention Action, we met a lot of people with direct, sometimes very raw and painful experience in the asylum system. And we quickly realised that we could – and should – not just run off with what we’d gleaned and make a play by ourselves, but continue to work with these people and organisations in this making process.

And in fact, having said that little has changed in the official system, this aspect of The Claim shows that artistic projects can build on longstanding campaigns by these kinds of groups and make a real difference. There were a range of activities that happened alongside the premiere, designed in collaboration with the people met through migrant organisations. One of these was an audio installation created by people we’d met who’d been through the asylum system. We recently learned that one of the testimonies written for this installation is now part of official training for all asylum case workers (interviewers and decision makers) at the Home Office.

If you could change one thing about the asylum process in the UK, what would it be?

It’s ability to listen to and see the human beings caught in its system. That actually means changing a lot of things, but I think a lot of it might just be about the institutional attitude.

The Claim will be at the Festival for the full month performing daily (except Tuesdays) at Roundabout at Summerhall at 12:50pm (65 mins)! Make sure you catch our preview shows on the 31st July and 1st, 2nd and 3rd August at Roundabout. The best way to keep up-to-date with what’s going on with The Claim during the festival is to follow us on twitter @TheClaimShow and use #TheClaimShow. Other good twitter accounts to following are @JamesQuaife @MadeInChinaThtr @markjmaughan @Summerhallery @painesplough

You can see the show at the Paines Plough’s Roundabout Auditorium, which is part of Summerhall, at 12.50pm everyday (apart from Tuesdays). Book your tickets here: https://tickets.edfringe.com/whats-on/claim