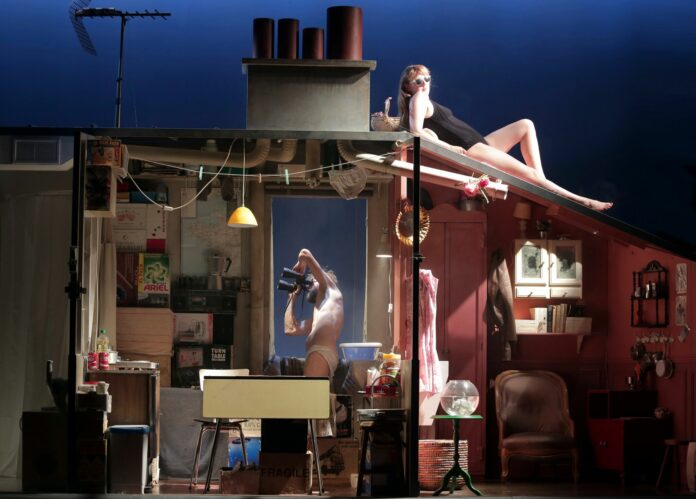 What do you get if you cross the set design for Friends with the antics of Mr Bean and Charlie Chaplin? The answer is award-winning show Fishbowl. Described by Télérama as ‘a comic explosion’ and rated 5 stars by both Le Monde and Le Parisien,  the show revolves around ‘the hilarious misadventures of three eccentric and lovable anti-heroes crammed in their wacky rooftop bedsits’.  Here we speak to Pierre Guillois, who tells us more about the show.

My name is Pierre Guillois, I am a French director, author and actor. I love to create shows; each show is very different. I mostly try to make shows that are accessible for a wider audience, what we call in France: “populaire theatre.”

I used to be the Director of Le Théâtre du Peuple à Bussang, which is a very old and wonderful theatre in a small village in the mountains where for more than 120 years thousands of people come each summer to this magical woody venue. It is here that I learnt to write shows for “everybody.”

Fishbowl is symbolic of this utopia.

Not only is it funny – very funny I suppose – it has no spoken word. This way everybody can understand, you don’t have to know about theatre. We all know happiness and sadness; from small children to older people, we can all share the journey, laughing and crying together.

Being funny was not enough, we invested a lot of time on the importance and quality of the gags.

We wanted the show to be hilarious, but also tender and heart-breaking. We want the audience to empathise with the three characters. To laugh along with them as they experience their trials and tribulations, so everybody shares the joke and leaves the show uplifted.

A successful Fringe run means the show reaching the widest possible audience and people loving the show and Fishbowl becoming the talk of the Fringe! We would love to sell-out!

We would also like Fishbowl to have a life beyond the Fringe, maybe find a home for it in London or a UK tour.

Have you performed at the Fringe before? What is the worst rumour you have heard about performing at the Edinburgh Fringe?

No, this will be our first time performing at the Fringe!

It is not so much a rumour as what I’ve seen as an audience member: a show in a big venue (700 or 800 seats), with about 15 performers on stage, and nearly the same number of people watching the show!

Your show ‘Fishbowl’ has had considerable success over the years and in the run up to the Fringe, winning a Molière Award for Best Comedy Play. Tell us about that journey.

It has been an exciting journey that started in Brest (Brittany, France). Right from the very beginning we felt something amazing was happening, it was well received by the audience, industry and journalists and everyone was so enthusiastic.

In France, we are so fortunate that each small town has its own subsidised venue, if a show is popular it can have a successful touring life. We have performed in 120 towns in France, Switzerland and Belgium.

We played in Paris for five weeks; Théâtre du Rond Point was the first venue, then due to the success of the show we had an 8-month run at Théâtre Tristan Bernard. After that we had the opportunity to play in Portugal (Almada Festival) where we won the Public Award, so we went back the following summer. In April 2019 we were in Toronto for three weeks as part of Canadian Stage.

The show is about modern loneliness in big urban cities, but I don’t want to dwell on a specific message. Fishbowl is also a physical experience about empathy; the show is about us, ordinary people like you and me. We can laugh because we all understand the weird destiny of what it means to be human.

Nevertheless the characters convey a message of optimism because even though life is challenging for them, even if they are spectacularly failing at everything they do, even if their love stories are hopeless, they remain optimistic and they build friendships with their neighbours.

The three neighbours in the show strike up unlikely friendships. Who are the main characters in Fishbowl?

An accident-prone hoarder, a karaoke-loving gadget geek and an inept career junkie.

The set for Fishbowl is incredibly detailed! How long did it take to design and build?

Laura Léonard, the set designer, designed a first set for the rehearsals. The rehearsals took a lot of time because we had to develop all the ideas on stage during hours and hours of improvisation.

We also had to experiment with the props and all the mechanisms. Once all this work had been done, the set designer was able to build the final set. After the opening night and for many months afterwards, we kept making improvements to the show, the props and the special effects.

The show has always been very lucky with amazing word-of-mouth, we will be building on that by posting about the show on social media, sharing interviews, a great hand-to-hand team, and look out for Fishbowl posters around the Fringe.  Have a look what we are up to on Twitter by following @fishbowltheplay and @storiesintheatr.

Fishbowl will be performed daily at 13:00 at the Pleasance Courtyard (Venue 33 / The Grand) from July 31st to August 13th and from August 15th-26th. Tickets are availble from the Fringe Box Office.