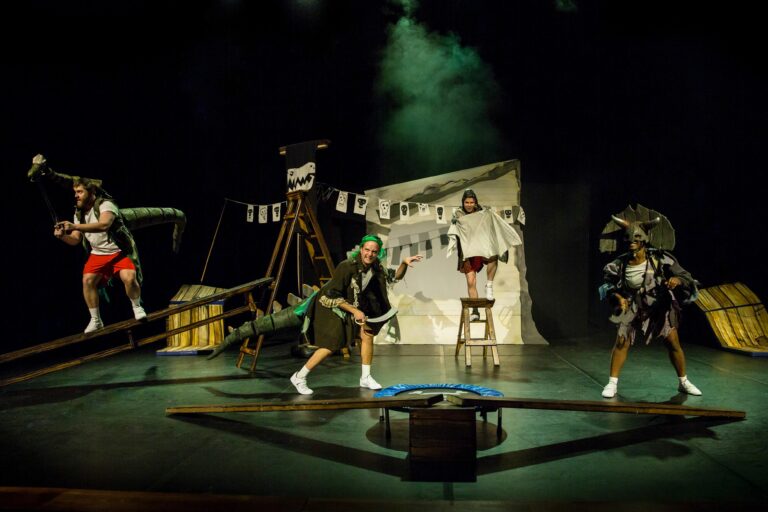 Based on the best-selling books by Giles Andreae and Russell Ayto, Les Petits Theatre Company are bringing their latest adaption to the Edinburgh Fringe ‘Captain Flinn and the Pirate Dinosaurs:The Magic Cutlass‘. Audience members young old join Flinn as he attempts to rescue his kidnapped friends who have been forced to hunt for the Magic Cutlass by his nemesis, the tyrannical Mr T-Rex. In our ‘Meet the 2019 Performers’ Les Petits give us their top tips for Fringe first-timers and tell us more about their show!

I’m Fiona Porritt, Assistant Creative Producer of Les Petits, and we’re very excited to be bringing Captain Flinn and the Pirate Dinosaurs: The Magic Cutlass to the Edinburgh Festival Fringe this year.

There are many! But a special mention must go to the brilliant pirate dinosaur puppets, crafted by Max Humphries. Some as big as 9ft tall.

It’s when you perform a show which attracts that ‘word of mouth’ appeal. Our dinosaurs can usually be found roaming in the Pleasance Courtyard, which can get people’s heads turning…

– Talk to everyone you meet and make connections.

– Make sure you see other people’s work and take the time to appreciate the festival as a punter.

– On the other side of the scale, make sure you plan to take time out and relax – go for a swim or take a trip to the cinema.

For those that haven’t read the book, can you explain who Captain Flinn is?

Captain Flinn is a normal boy who gets to have amazing adventures with his friends. When we first meet Flinn, he’s performing in his school play with his pals Pearl and Tom. Suddenly their old nemesis, Mr T the T-Rex, appears and kidnaps the children forcing them to hunt for the secretive Magic Cutlass.

Do you have a favourite song from the show?

I’m a big fan of the number ‘Dastardly Dinosaurs’ where each of the pirate dinosaurs take turns to introduce themselves.

Pirate dinosaurs sounds like great fun! Is there a favourite dinosaur amongst your audiences?

Definitely Diplo the diplodocus. He may not be the brightest of the bunch (and has the problem of being seasick when he spends most of his time at sea), but I’d say he’s probably the most kind-hearted of all the dinosaurs.

The show involves a hunt for the magic cutlass. What magical powers does the sword have?

Ah, well at this point it’s a bit of a mystery, though if you happen to see Mr T the T Rex in the show, I’m sure he’ll tell you what he thinks…

Captain Flinn and the Pirate Dinosaurs is on at 10:45am, 31st July to 19th August (not 13th), Pleasance One, Pleasance Courtyard.

‘Captain Flinn and the Pirate Dinosaurs: The Magic Cutlass‘ is on at the Pleasance Courtyard (Pleasance One/ Venue 33) at 10:45 every day from July 31st-August 12th, and from August 14th-19th. Tickets available from the Fringe box office.