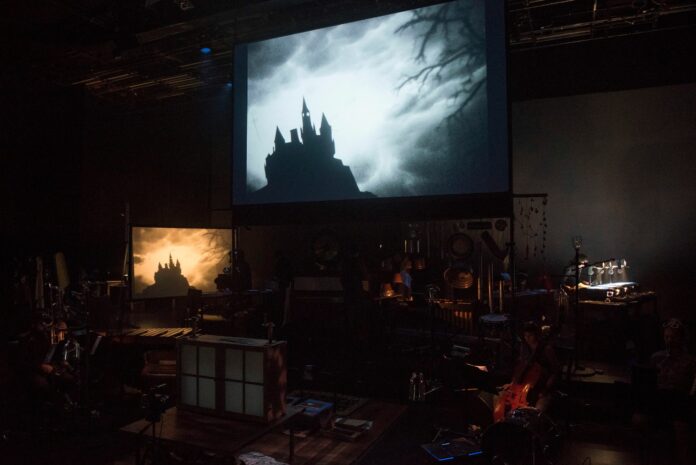 ” I know this is a sound byte that is repeated often with regard to Edinburgh Fringe shows, but I really truly don’t think there’s anything else out there quite like what we do”. And you know what? We totally agree! Manual Cinema’s Frankenstein is a fascinating merging of cinema, sound , music and puppetry evoking 1920s cinema on a 21st century sound stage. Over to Kyle Vegter of Manual Cinema to find out more.

My name is Kyle Vegter, I’m a composer/sound designer and one of the five Co-Artistic Directors of Manual Cinema. We’re a multi-disciplinary performance collective, design studio, and film/video production company based in Chicago, Illinois, USA. In most of our work we combine handmade shadow puppetry, cinematic techniques, and innovative sound and music to create immersive visual stories for stage and screen.

This year we’re bringing our adaptation of Frankenstein to the Fringe at Underbelly’s McEwan Hall. The show weaves together the story told in the classic novel and scenes from Mary Shelley’s life surrounding her writing of the novel. All of it is told using a combination of shadow puppetry, live actors in camera, a 3D creature puppet, immersive surround sound design, and a live original score written for an array of percussion instruments, clarinets, flutes, cello, and voice. There are even little robots that bring the stage to life playing percussion instruments when the creature wakes! The effect is of a feature length film, but the whole thing is made live on stage each night.

I know this is a sound byte that is repeated often with regard to Edinburgh Fringe shows, but I really truly don’t think there’s anything else out there quite like what we do – and Frankenstein is by far our most complex, technically demanding, and genre bending show to date!

The Fringe is such an incredible international platform. There are just so many people from so many different places around the globe there to see what’s new in theater and performance. We think of our work using only the ‘language of cinema’ (far shots, close ups, pans, etc), and we use almost no spoken or written dialogue. So the work doesn’t rely on an audience’s understanding of English to enjoy the show. It’s so interesting to see how audiences from around the world react to our work, especially our take on the iconic Frankenstein story. I think a successful run to us is getting the work in front of as large and as diverse an audience as possible.

There’s just SO MUCH to see. In past years I’ve benefited a ton from doing a fair amount of online research in advance. All the various producers and artists are pretty great about creating online content that lets you know what their work is all about. I buy most of my tickets in advance based on online research and reading reviews. Of course, always leave room for impulse. If you get a flier on the street that sounds interesting, go check it out! Tickets at the fringe are very affordable so if you take a chance and end up not liking something you see, you’re only out £10-20

Manual Cinema’s work is highly theatrical, and yet it comes across very different to most plays you will see at the Edinburgh Fringe. How would you describe this piece to someone who’s never experienced one of your shows before?

I usually describe our work as a ‘live film’. When you come to one of our shows there’s a large movie sized screen hanging above the stage. If you just watch that screen it feels like you’re watching an animated film told with a few different animation styles. But if you look just below that screen to the stage, you see the *real time* chaos of making the film (every shot transition and every downbeat of the score) all created by 5 actor/ puppeteers and 4 musicians using 100s of paper puppets, countless costumes and wigs, a 5 octave Marimba, a custom percussion rack of found object instruments, and much much more. Audiences often describe a particularly interesting tension between the clean, cinematic images and sounds presented on the big screen- and the absolute craziness on display that goes into creating them.

I think our take on Frankenstein focuses a lot on responsibility, and what happens when one refuses to take responsibility for one’s actions. In rejecting his Creation Victor sews his own fate and ensures his eventual downfall. This is a theme that is definitely present in other adaptations of the novel, but I think it’s especially prescient in 2019. You see it in our struggle with climate change, the #MeToo movement, the #BlackLivesMatter movement- the long-time status quo is being challenged in a big way and large swaths of society are being forced to reconcile their decisions with their (un)intended outcomes. The show also deals with grieving, acceptance, and relationship between parent and child/ creator and creature.

Your production is multidisciplinary in its storytelling. How do you bring these varied discipline together to form a coherent narrative?

In most of our theatrical work narrative is the absolute driving and unifying force behind the production. We use many different visual and aural techniques in any given show, but all of them have to serve the story we’re trying to tell. For example, in Mary Shelley’s novel Frankenstein the structure of the book is one of nested frames. You begin with a ship’s captain telling the story of a lost traveller he finds in the arctic, and then zoom into the first person story of the lost traveler (Victor Frankenstein) searching for the Creature he created,, and then zoom in even further to the first person story of Creature coming to be. We wanted to find a way to represent those narrative frames in a visual and aural way for our piece. We also added a frame, telling the story of how Mary Shelley set out to write the novel. So in our piece Mary Shelley’s story is told using shadow puppetry and orchestral instruments (flutes, clarinets, cello, etc), Victor’s story is told using actor’s in costume with cinematic camera techniques, robot percussionists, and distorted contrabass clarinet, and the Creature’s story is told using a 3D creature puppet and found object percussion (tuned pieces of metal and flowerpots). All of these various techniques though, are used in the service of telling a powerful and touching story.

Mary Shelley led an eventful though tormented life. Was there anything in particular that you found astounding about her life-story?

You’re spot on, she had an incredibly turbulent life. I think what really floored me was that she wrote one of the most legendary, iconic stories at the age of 18! In the 18 years leading up to her writing the novel she had already experienced more grief than most people experience in a lifetime. Her mother (Mary Wollstonecraft, a famous feminist writer) died giving birth to her, Mary herself had two miscarriages, and her sister Fanny (whom she was close with) committed suicide. All of that by 18, and she still had the courage and artistic prowess to produce a masterpiece that we’re still enraptured with.

Manual Cinema’s Frankenstein will be performed daily at 14:45 at the Underbelly, Bristo Square (McEwan Hall/Venue 302) from July 31st to August 11th, and from August 13th-26th. Tickets available now from the Fringe Box Office.